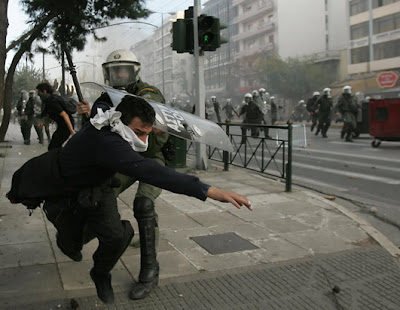 This photo is from ABC news' website for more click here
Protests,strikes and violence are all over Greece due to the death of a young boy by a Greek police officer and also for the bad economic hardship they face and the government's scandals since a long time.
Alexandros Grigoropoulos a 15-16 year old who was shot in Athens after the boy had allegedly tried to throw a firebomb at a patrol car,whose death sparked the riots back on Saturday December 6 , the lawyer of the police officer says that the death of the young boy was accidental and he was never been considered as a target,the bullet ricocheted off something solid before killing the boy.However,two policemen has been sent to jail pending trail,one of them was charged for murder,and the other one was charged as an accomplice to murder.

You know what?? all these events and news I see everyday made me feel mad and annoyed,people of Greece protest against things they don't like,defend their own right,refuse the hard and bad economic situations..THEY SIMPLY SPEAK UP !! regardless the riots and violence,but they do express their minds,because they're humans,because they believe in themselves,because they know their rights.One kid got killed by the government and the whole country got mad and protest against this un acceptable murder.Here hundreds of our innocent children are living under horrible circumstances,with fear,hunger,lack of water,lack of vaccines,lack of resources,or silently die....the unbearbale rising of prices,gas prices are the only thing that became lower,but nthn else did !! working two or three jobs these days won't help to improve your financial situations (that's if u could find jobs) ...and all of us are standing still,watching and commenting,that's it !! and that's how we are gonna be for ever...too lame. 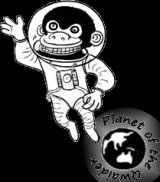